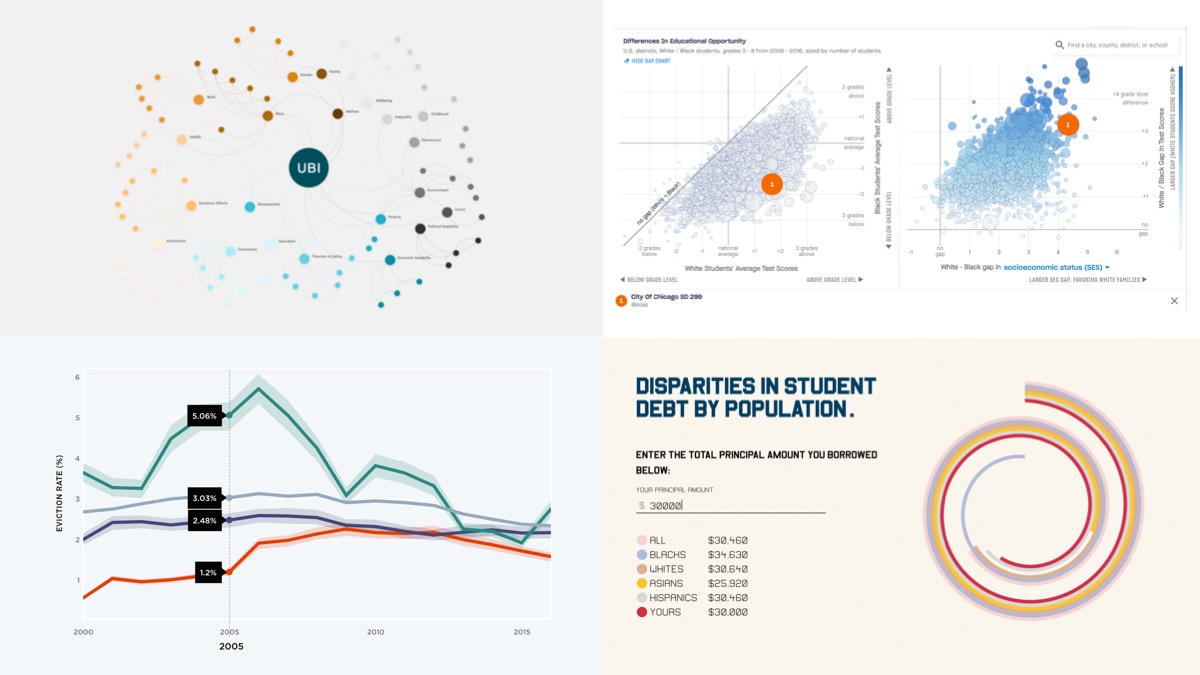 Reflections on the ambitious and rewarding projects we undertook in 2019

As we gear up for a promising 2020, we look back on this past year with feelings of gratitude and accomplishment. It was an intensely-eventful time for our team, full of opportunities to perform challenging, creative work aligned with our values.

I. The Educational Opportunity Project at Stanford University

At the start of the year, we were hired by Stanford’s Center for Education Policy Analysis to map and visualize test scores from their preeminent database of national education statistics (known as the Stanford Education Data Archive, or SEDA).

What was initially scoped as a small project eventually expanded to the better part of a year of intensive development on features including a richly detailed map, scatterplot charts, interactive articles, and the ability to export reports and embed visualizations.

More than simply ranking areas and presenting test scores, the site paints a wider portrait by offering data on the socioeconomic context of each location, and offers ways of separating out schools’ effectiveness from the educational advantages offered by their surrounding communities. You can see the results at edopportunity.org.

So far, the website has been featured in the Washington Post, The Wall Street Journal, Quartz, and many other media outlets.

Charts depicting opportunity gaps between groups of students in the US

Meanwhile, we were also hard at work on a website in partnership with Princeton’s Dignity + Debt network, which launched in spring. In addition to creating a new visual identity and web presence, they tasked us with building a compelling interactive app.

It’s always great to have clients who push us to break the standard data viz mold and produce more evocative information design. In this case, inspiration came from one of the early data visualization pioneers, W.E.B. DuBois, whose work charting the effects of institutionalized racism around the turn of the 20th century served as a template for examining present-day racial disparities.

In homage to Du Bois, we created a student loan debt calculator which allows users to compare their borrowed amount to that of other demographic groups, and weigh the tradeoffs of various repayment scenarios. 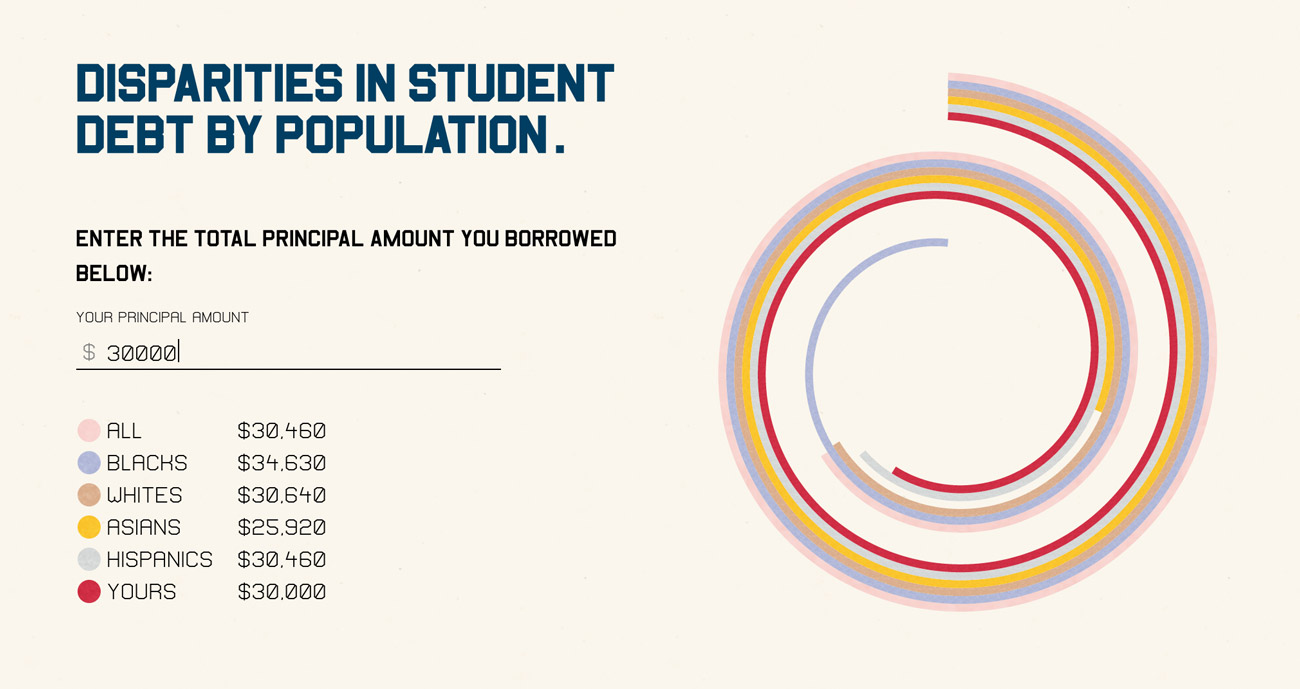 Next on our plate was a new visual identity and website for the Stanford Basic Income Lab, which studies theories, approaches, and outcomes related to Universal Basic Income (UBI). Continuing the trend of partnerships that task us with crafting novel and imaginative designs, we are currently working with the Lab to develop a network visualization of major themes and topics related to UBI, along with a map of basic income experiments around the globe. 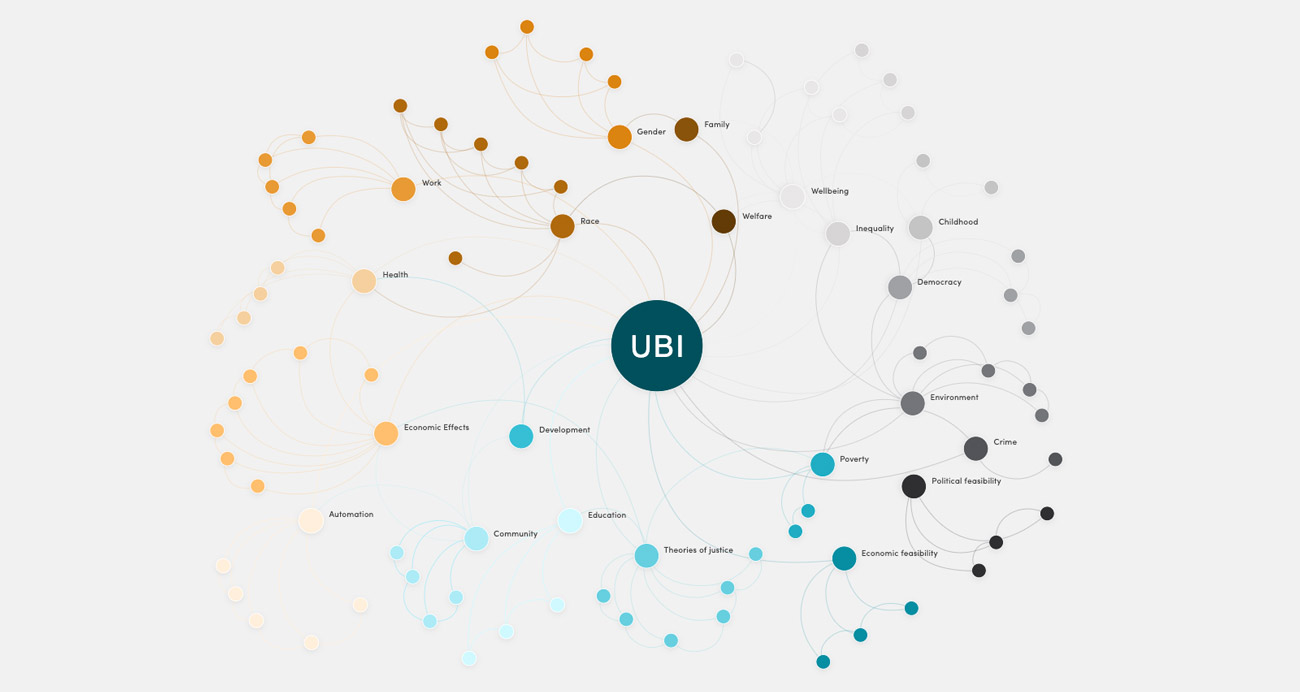 Throughout the year, we were inspired to see the work of one of our clients, the Eviction Lab at Princeton University, continuing to drive change and make a difference in combating America’s eviction epidemic. We noted some of these impacts here in an interview with Mapbox, including newly enacted legislation in states and cities around the country, and an unabated stream of media articles since launch of their eviction database in 2018.

We also partnered with NPR’s On the Media to create website integrations for their “Scarlet E” series about the eviction crisis, and built a special “museum mode” of the map to accompany an exhibit based on the book Evicted, which traveled to 10 cities. And most recently, we’ve seen housing and eviction take greater priority in 2020 presidential campaigns; Elizabeth Warren, for instance, includes renter protections as part of her platform, which links to the Lab’s website.

Starting this fall and continuing into 2020, we’re working on a major update to the Eviction Lab website. We can’t say much before launch, but it will involve a refresh of user interfaces, pages on the site, and the data itself.

We also worked on a number of smaller projects, including a UX consultation & UI redesign of Public Impact’s Opportunity Culture school improvement portal, and a website to promote a forthcoming book and research by a scholar in the field of international conflict (coming soon).

VI. The Year Ahead

Looking forward, we’re gearing up to release new features and expansions for the above-mentioned projects, and we’re also excited for the opportunity to work with new clients. If you have a project that involves design & web development, data visualization & analysis, UX consultation, or any of the other skills in our wheelhouse, please feel free to reach out to us at info@hyperobjekt.com. We’d love to connect and learn how we might be of service.

Have a great new year, and stay tuned for more from us!